LAS VEGAS, Nevada (October 12, 2015) – Andy Roddick defeated James Blake 5-1 in men’s singles to lead Team Elton to a 17-11 victory over Team Billie Jean at Mylan WTT Smash Hits in front of a capacity crowd at Caesars Palace in Las Vegas on Monday night. The biggest winner was charity as, for only the third time in event history, Mylan WTT Smash Hits raised more than $1 million for the Elton John AIDS Foundation with a portion of those proceeds benefitting local charity Aid for AIDS of Nevada.

Mylan WTT Smash Hits, co-hosted by Sir Elton John and Billie Jean King, has now raised more than $14 million to support HIV and AIDS prevention and awareness programs since the first event in 1993.

The multi-colored Mylan WTT tennis court was built just steps away from where Elton John plays his hit show, “The Million Dollar Piano” at Caesars Palace.

The evening started with all the players participating in a live auction that raised approximately half of the night’s total. Among the top auction items was a $100,000 bid for a private hitting session with Andre Agassi and Stefanie Graf and two signed Elton John piano benches, which sold for $30,000 each. 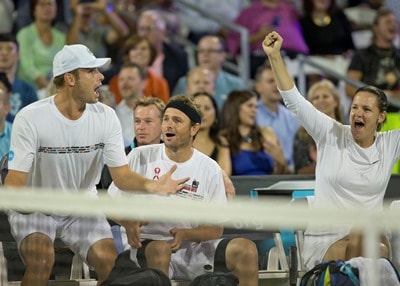 When the action moved from the auction to the stadium court, it was Elton John who stole the show. The avid tennis player and fan teamed with longtime friend Martina Navratilova for an upset 3-2 victory over Andre Agassi and Stefanie Graf. Although the opening celebrity set didn’t count towards the final overall score, it inspired Team Elton to a quick start in men’s doubles.

Andy Roddick and Mardy Fish teamed together for the first time since they paired up on the ATP World Tour this July in Atlanta. The duo was too tough for Andre Agassi and James Blake as they posted a 5-3 set win for Team Elton.

A quartet of Hall of Famers took the court for women’s doubles. Team Elton added to their lead as Lindsay Davenport and Navratilova outlasted Graf and Tracy Austin of Team Billie Jean, 5-2. 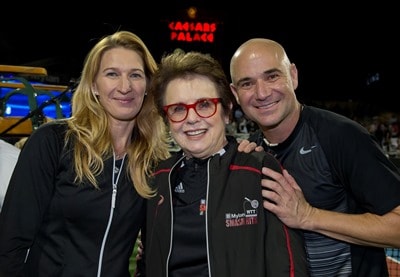 Las Vegas residents Agassi and Graf gave Team Billie Jean their first set win as they impressively took out Fish and Navratilova 5-2 in mixed doubles, but Roddick quickly regained the momentum in men’s singles to clinch the match and give Team Elton the 12-11 edge in the all-time series.

Even though her team was on the losing end of the final score, King was thrilled with the Las Vegas debut of Mylan WTT Smash Hits. “We raised a lot of money for EJAF and left money locally for HIV/AIDS organizations. And the players come for nothing every year, so they are amazing. The crowds were so packed tonight, we had to turn people away. I loved being here at Caesars Palace but I have to live with being down to Elton now for a full year. He will be reminding me of it.”